Last week I joined over 400 web nerds at CSS Day 2019, which took place once again in the lovely Compagnietheater in Amsterdam. These are some of the things I learned.
Left to right badge that says hidde de vries man that makes smoothies surrounded by smoothies three speakers in front of their respe…

Here’s the list of blogs I read.
You can see that list just by clicking on that link, and it will look something like this in your browser:
Detail from my blogroll OPML, with an XSLT transform applied.
But you can also save that file, and load it into your RSS reader of choice, to import my list o…

Everyone is linking to this—but, come on! This is in my dept…

A collection of thoughts by writers on how stuttering has influenced their writing. 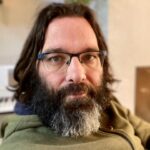