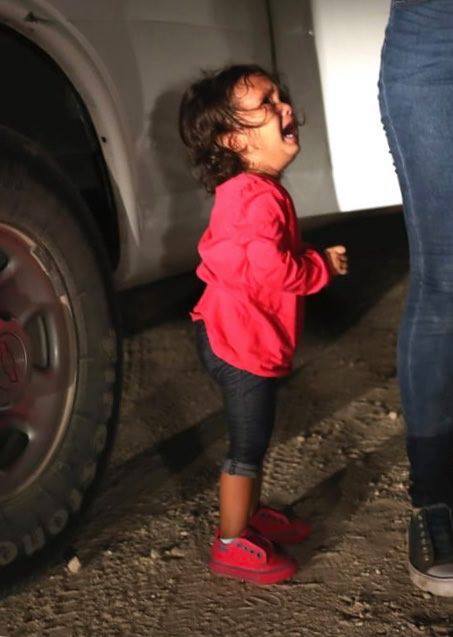 While I don’t use Facebook anymore on a personal account, every now and again I come across a link to a story on Facebook that needs to be told. Personally, I would like to see stories like the one below to be shared on owned property like a blog or a website, instead of leased and data-driven property like Facebook. While I normally try to refrain myself on this site from political standpoints, big issues and anything related to current state of affairs, right now I want to share the story below. Because it needs te be told on the open web. As a lot of other stories need to be told, shared, stored and archived on the open web.

I reached out to Dean Gloster, the author of the story below, to ask if it’s OK to share his Facebook post on this blog. That way it is on the open web. It can be indexed by searchengines, the link will stay up, copies will be made and this story, this point of view will not be lost. The text below is the exact way Dean wrote, I added some links that emerged in the original Facebook comments and Dean is referring to.

Dean was kind of enough to give his consent to share his original story I found on Facebook. So this is his story. These are his words. I stand behind them, I support his rallying cry. But all the accolades and praise are for Dean. Find him on Twitter or on his own website.

Pictured: a two-year-old Honduran asylum seeker about to be taken from her mother and placed in a facility where the staff (according to an interview) “is not allowed to comfort her.”
(Long again. Sigh. Please read it anyway.)

We are now essentially torturing parents who legally seek asylum in the United States (and their children), by taking away their minor children, caging those children, and telling the parents they may never be reunited–all to “deter” them (and those like them) from exercising their legal rights under U.S. law. This new Trump “zero tolerance policy” (announced and implemented April 6, 2018 by Jeff Sessions) is evil and not based on our laws.

As some of you know, I used to be a lawyer, and in the 1980s I used to do pro bono political asylum work for Salvadorans fleeing death squads. U.S. law allows you to claim political asylum here if you have a “well-founded fear of persecution” in your home country that fits within specified categories. You can either present yourself at a point of entry and claim asylum (risky–you aren’t afforded a lawyer and most asylum claims are turned down) or you can claim asylum as a defense to deportation.

Now on our southern border, the U.S. is (contrary to law) refusing to admit those legally claiming asylum (Chis Hayes/Beto O’Rourke interview, in comments.) They are forcing immigrants to cross into the U.S. illegally, and then arresting them and (even if they have a defense to being deported because of a potentially valid asylum claim) taking their children to be housed in a concentration camp–an abandoned Wal-Mart filled with cages or a new tent camp in 100 degree Texas heat on a military base. This is being done, per Jeff Sessions and Mitch McConnell, to “deter” them from seeking asylum–that is, as a punishment to them, to deter others from doing the same thing. Even though that thing (claiming asylum) is completely legal under U.S. law.

Accounts from Congressional Representatives and pro-bono attorneys reveal that parents are told that their children are being taken away “to get a bath” and then the children are not returned. When asked how they’ll be reunited, parents are being told “your families do not exist anymore.” Parents have been deported and they don’t know where their children are. Because there are at least four federal bureaucracies involved (CBP, DHS, ICE, ORR in addition to private prison corporations and the DOJ) and there was no planning for implementing the policy none of attorneys representing them, the Customs and Border Patrol, nor U.S. Congressional Representatives can get confirmation that the children are even being kept track of by family.

Not surprisingly, one man, after learning that his child had been taken away, recently killed himself.

Jeff Sessions announced the new policy on April 6, 2018 (link in comments) but Trump now (1) claims, inaccurately, that it’s “the Democrats’” prior law (a complete lie) and (2) tweeted today that he won’t change the new policy unless Congress agrees to fund the wall and end political asylum and end “catch-and-release.” (That is, we must make the current policy permanent and worse.)

Today, DHS revealed that almost 2,000 children have been taken from their parents in the last 6 weeks under the new policy. (Washington Post link) Children are housed in cages on concrete floors. Many of the children don’t have access to anyone who speaks their language. The staff has no training to deal with the children’s trauma, and a whistle-blower recently explained that both the staff and the children are traumatized, while the CEO of the private prison company has been paid $1 million. (Chris Hayes, after the O’Rourke interview, in comments.)

Today, three medical organizations announced their unanimous denunciation of this new policy because separating young children from their parents and incarcerating them is permanently traumatic. (Link in comments)

So here we are, friends. This is a violation of the Fifth Amendment guaranty of due process of law. It’s a violation of the Eighth Amendment prohibition against cruel and unusual punishment. It is a violation of international law. I would hope that any of those who continue to assist the implementation of this new policy are shunned by their congregations of faith until that changes. (Catholic bishops have already discussed assessing Canonical penalties to ICE agents ranging from refusing the sacrament of communion to excommunication.) I would hope that our courts ultimately order them to cease and desist, and if they fail to do so, that they are jailed for contempt of court. I hope they are ultimately prosecuted as international war criminals and they can never travel outside the U.S. In the meantime, every single one of them has violated his or her oath to uphold the U.S. Constitution, and they deserve our horror and our contempt.

I’ve spent today in a funk, knowing that I needed to write this, and hating that fact. I have, despite every horrible thing up until the last nineteen months, been proud to be an American, choosing to concentrate on our lofty aspirations (equal protection, freedom of speech) rather than our tragic failings (slavery, segregation, white supremacy, McCarthyism.)

But this is simply unmitigated evil. And refusal to face it or to acknowledge it or to own it, is cowardice and a deliberate choice to enable evil. (Yes, friends, this is America, today. This is exactly who we are, until we change it.)

We are terrorizing families. We are traumatizing children. We are violating our principles and our laws to further a racist ideology of our misguided rulers. We are doing evil. We need to do everything in our power to stop that. Now.

The last couple of days Twitter, amongst other places, has been on fire with arguments pro and con on the above situation. Yes I am aware there has been legislation in place for the last couple of years. Yes, I know the selected outrage might be out of place. Yes, I know we as Europeans are doing the same things. That doesn’t stop me from being outraged and talking about it here on my site. You can disagree, that’s fine. You can call me an ignorant leftist who only listens to the mainstream media when he wants. That’s fine. If you want to share your point of view, write a blog and publish it. Share, learn and communicate on a human level on these issues. Thank you. Don’t come crying here if you disagree. Use your own platform called the internet.

And now… back to our normal programming.